Internationally acclaimed in the role of the Queen of the Night, Darlene Ann Dobisch was born and brought up in Hardwick MA. She graduated with honors in voice from Clark University, the University of Michigan, and after moving to Europe in 2000, from the Luebeck Conservatory of Music 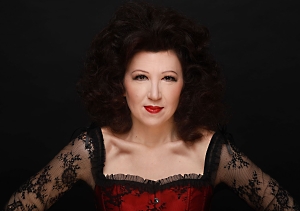 Ms. Dobisch has had engagements with the NDR Chorus, as a soubrette at Theater Neustrelitz, and for numerous lyric coloratura roles at Opernloft, Hamburg. She has performed the Queen of the Night in various productions of Mozart’s “Magic Flute” over 200 times. Her busy concert schedule with originally conceptualized recital programs takes her through Europe and North America on a regular basis.

Ms. Dobisch has enjoyed a particularly long and productive collaboration with Berlin Conductor, Pianist, and Stage Director, Christoph Hagel and the Berlin Symphony Orchestra. Under his direction she has sung the Queen of the Night in The Magic Flute in the Subway, Genio in Haydn’s “Orpheus and Euridice,” the Countess in “The Marriage of Figaro,” Gabriel/Eva in Haydn’s “The Creation,” and the soprano solos in Bach’s “St. John Passion,” fully staged in the Berlin Cathedral. Their latest collaboration, “Magic Flute Reloaded” features performances in Bayreuth and Munich in 2019, and Berlin in 2020.

She is also currently singing the Queen of the Night in the cross-over event, “Breakin’ Mozart” with Mr. Hagel and the DDC Break Dancing Company. The piece premiered at the Mozart Festival in Würzburg, and has been performed at the Munich and Berlin Philharmonics, Prince Regent Theater in Munich, Technopolis in Athens, Greece, Museums Quarter in Vienna, and many other venues. The show will continue on tour Europe-wide until at least 2021.

Ms. Dobisch conducts master classes and workshops internationally and teaches voice in music schools and privately in the Hamburg area.